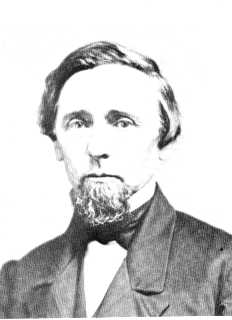 George Hammell Cook (1818–1889) was raised on a small farm in Morris County, NJ, in the early 1800s. After high school, he spent a number of years as an itinerant, working as an engineer with a railroad in the Catskills, teaching and studying at the Rensselaer Institute, managing a glassmaking house in Albany, NY, and teaching at the Albany Academy. He came to Rutgers College as professor of chemistry and natural sciences in 1853 at the invitation of then President Theodore Frelinghuysen. By the time he came to Rutgers, Cook had expertise in geology, chemistry, engineering, and agriculture.

Among Cook's first research projects was the chemical analysis of "greensand marl," a soil deposit found in central and south Jersey. This research led to his appointment as assistant state geologist. A thorough geological survey of New Jersey, published in 1840, was already out of date, and Professor Cook was appointed to undertake its revision. His work would become the model for the U.S. Geological Survey.

In 1862, the Morrill Act was signed into law by President Abraham Lincoln. The Morrill Act was driven by the idea that everyone (every young man, at least) could benefit from an education in the sciences. The act provided for the establishment of a college in each state where students would receive an education that included scientific and classical studies, military tactics, agriculture, and the mechanic arts. A unique American contribution to higher education, the land-grant concept applied scientific research to local problems. Cook, who was a strong believer in the concept of scientific agriculture, led successful lobbying efforts (against Princeton and the state Normal School at Trenton) to have Rutgers designated as the site of the land-grant college. The Rutgers Scientific School (as it was then called) was founded in 1864 as New Jersey's land-grant college, with George H. Cook at the head. A 100-acre farm on the outskirts of New Brunswick was purchased from the estate of James Neilson to serve as the school's experimental farm. (Rutgers was given 210,000 acres of what is now Utah under the Morrill Act, which was sold to establish the college and purchase land for the experimental farm.) That land is now the heart of the George H. Cook Campus.

In 1887, the Morrill Act was amended by the Hatch Act, which established funds for state agricultural experiment stations. These federal- and state-appropriated funds were used to build New Jersey Hall, which housed Rutgers Scientific School, and to acquire additional faculty and farmland. George H. Cook became the first director of the New Jersey Agricultural Experiment Station, which now includes offices in all 21 New Jersey counties. In 1912, the (by then) College of Agriculture moved from the College Avenue Campus to the campus of the experiment station.

The land-grant triad was completed in 1914 with the Smith-Lever Act. This act established the Agricultural Extension Service, which located College of Agriculture faculty in each of the counties. Under the land-grant framework, campus-based academic programs complement experiment station research, which in turn is disseminated to the public by local extension agents. Residents call extension agents with a problem, who either work to resolve the problem or initiate research into it.

The creation of Cook College from the CAES in 1971 was in many ways transformative. Cook College aimed to offer an interdisciplinary, problem-oriented curriculum that emphasized environmental studies as well as the arts and sciences. This combination of features in a land-grant school was unique at the time. Today, with the transformation to the School of Environmental and Biological Sciences, the focus on creating a multidisciplinary learning environment remains, and new efforts have begun to enhance the learning environment for students. Through living-learning communities, an emphasis on hands-on and service learning, as well as international education opportunities, SEBS students will gain a deeper, more nuanced understanding of their curricular work. Together with NJAES, Rutgers and, more specifically the School of Environmental and Biological Sciences, works to fulfill the goals of land-grant institutions by enlarging the land-grant mission to include the study of environmental problems, natural resources, economic and community development, fisheries, nutrition, public health, and youth development--all of which address the diverse needs of a highly developed state.

The Morrill Act laid the foundation for the development of our nation's great public university system. The commitment of Rutgers University to the land-grant concept makes us unique among the universities in New Jersey. Rutgers students and faculty are part of a proud tradition of academic study, research, and public service, a tradition that began with the remarkable efforts of George H. Cook--educator, innovator, and public servant. As committed to science-based solutions as George H. Cook was in the nineteenth century, the faculty of the School of Environmental and Biological Sciences and the New Jersey Agricultural Experiment Station are equally committed to addressing the socio-economic issues that face our state's residents today.