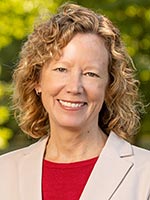 A professor of landscape architecture, Lawson was appointed in July 2018 as the Dean of Academic Programs at SEBS, responsible for all undergraduate and graduate programs, budget, and general administration. She made significant contributions in the areas of development of campus living labs, improving the student experience, and enhancing out-of-state and international undergraduate recruitment.

Lawson came to Rutgers in 2010 to serve as professor and chair of the Department of Landscape Architecture. She worked closely with faculty and staff to revitalize the department, which received a glowing accreditation review for its undergraduate landscape architecture program as well as the successful initial accreditation of the then new Masters of Landscape Architecture. Student enrollments grew due to an infusion of new direction, revised curriculum, and increased course offerings.

In 2015, Lawson was appointed Dean of Agriculture and Urban Programs, charged with supporting academic and outreach efforts that bridge urban and suburban communities with agriculture so as to enhance the economy, landscape, and culture of New Jersey. Other high level posts within SEBS include that of Faculty Director of Rutgers Gardens and lead researcher for Greek emergency food aid system study as part of the interdisciplinary leadership team for the Recharging the Youth in Agriculture initiative led by SEBS, in partnership with the Agricultural University of Athens and American Farm School in Greece.

Her scholarship includes historical and contemporary urban agriculture and community open space, with particular focus on community gardens and the needs and opportunities within low-income communities. Her book, City Bountiful: A Century of Community Gardening in America, provides a historical review of urban gardening programs in the U.S. She is co-author of Design as Democracy: Techniques for Collective Creativity, which won a Great Places Award in 2018, and Greening Cities, Growing Communities: Urban Community Gardens in Seattle, which won a Great Places Award in 2010. She was Design Intelligence's Thirty Most Admired Educators for 2015.

Her current research project, Cultivating Justice, involves collaborations with husband and digital storyteller William Atwater, as well as photojournalists and film-makers, to develop a multi-media forum to open dialogue around African American experiences that connect rural and urban agriculture.

Lawson has authored numerous articles and chapters in edited books that address urban gardening, service-learning, issues of race in design, and civic engagement design pedagogy. Prior to joining Rutgers, Lawson was an associate professor at the University of Illinois, Urbana–Champaign.